Yesterday we came up the Chesapeake to Solomon’s Island.  It was an uneventful run except for the fact that Dad had a friend with him almost the whole way.  He joined us early on and stayed most of the day. 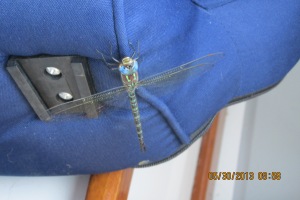 We did see a couple of beautiful lighthouses and, of course, I had to get their pictures. 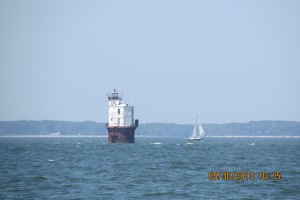 This was Smith Point Light.  Tom qued the sailboat as I took the picture.  He is so good to me.

Up the ways was the Point No Point Light.  No sailboat this time.

We docked at a nice place in Solomon’s Island called Harborview Marina.  I was in desparate need of a shower, so I went up to the bath house and was in for a surprise when it only had one toilet and a bathtub shower.  The shower was so decrepit that I thought I would fall thru.  It was good anyway and my sweet Tom brought me a wonderfully cold beer when I got out of the shower.

We got a wonderful surprise when Chris called and said he and Penny were on their way down to see us.  Dad was excited to see them, as was I.  They came aboard and had a lovely glass of wine and then we set off for dinner.  We went to a place called Ruddy Ducks and it was delicious.  We had calamari, crab cakes, homemade potato chip nachos, gluten free pizza, ribs, soup.  Tom had a burger.

One thought on “Penny and Chris”