We pulled in to St. Michaels on a beautiful day.  Tom and I decided to take a walk around town.  They have a maritime museum there and he wanted to see it.  We walked all the way over there and I discovered I did not have my camera.  Woe is me.   Tom oohhh’d and aaahhh’d over everything.  He had a great time seeing boats that he grew up with.  It was a wonderful indoor and outdoor museum.  We recommend it to anyone going up there.  We decided that we would get up the next morning and run over there to take the pictures that I missed by not having my camera.  We got over there and I took my first picture and the camera said I did not have a memory card.  Pulllleessseee.   I had left my SD card on the boat.  Sometimes I worry about my self….Anyway, we went to the farmers market and got a few items.  It was not a big one, so we got most of our stuff at the grocery.  It was quite expensive to tie up there, so we only spent one night.  I was able to get a few pics as we left the marina.

We headed up to Kent Narrows that noon time.  We were going to meet Louise and Don Kepley ( and Meredith).  Little did I know that Louise had gotten in touch with Cheryl and Stan Burlingame and they came up too.  It was great fun seeing them.

Steve Ghezzi also came to see us while we were there.  He is a special agent with NCIS in Baltimore.  We had not seen him in quite a while.  It was great seeing him.

In Chesapeake City we walked around town then came back to the dock and had Boat Drinks.  Dad and I were very happy with that.  He had a Pina Colada and I had a Margarita.  Yum 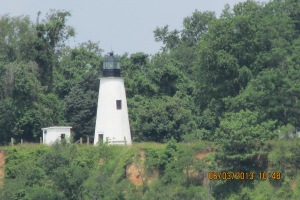 Turkey Point Lighthouse, en route to Chesapeake City and the C&D canal.  I am trying to take a pic of the lights we see for my sister Jean.  She loves lighthouses.

Dad is growing a beard!!!  My friend Ellen suggested I take a pic on the first day of each month to see how it is progressing.  Here is June 1, 2013.