We crossed Lake Michigan from St. Joseph’s to Chicago on a rainy and windy day.  We left at 7:00am and did not arrive until 2:30pm.  The seas were rough and tumble.  We held on for dear life and ploughed through.  This is Labor Day weekend and we expected to see a lot of boats out and about, but the weather was not cooperating so we did not pass too many.  We arrived in a bank of fog and rain.  The city was spectacular from the water.  With the fog over some of the high rises, it was beautiful. 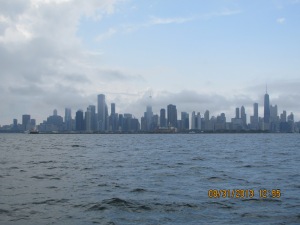 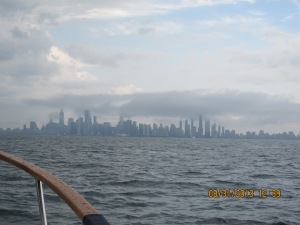 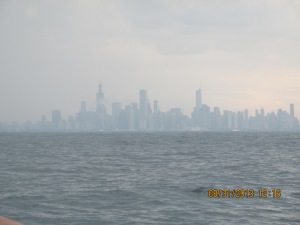 It was raining but so beautiful from afar.

Navy Pier from the water

After we tied up, Tom and I went for a walk down to the Navy Pier.  It had cleared up a bit and was not raining. 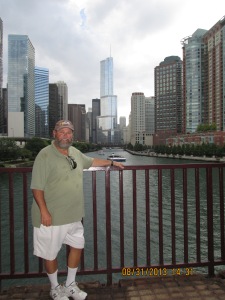 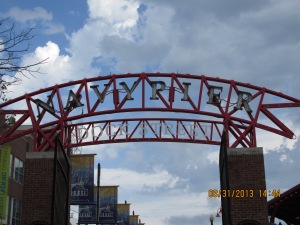 The Navy Pier was very cool.  There were quite a few restaurants and shops, along with a great amusement park.

This sign showed us how close we were to Cait!! 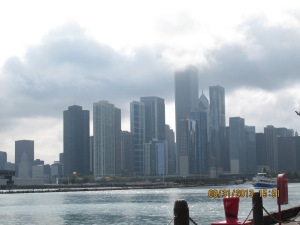 From the Navy Pier, looking back toward the marina 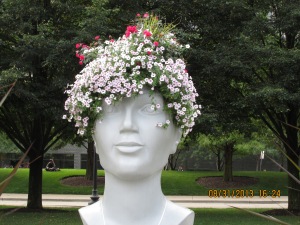 I took this pic for our niece, Kristen, our hair stylist.  This statue was huge.

Looking back from the walking bridge to the Chicago Lock

I went to bed that night around 1:00 and was talking to Tom when I heard something strange.  It was about 1:30 and it sounded like someone was on our boat.  I told Tom and he jumped up and looked out the windows.  Seeing nothing amiss, he went up to the salon to look out the doors and saw two fellows trying to break in our door.  Tom slammed his fist on the door and yelled at them.  They flew over the side rails of the boat, on to the pier and out the gate.  Tom opened the door and ran out after them yelling the whole time.  There were supposed to be guards down at the pier, so Tom was hoping to get their attention.  The bad guys were long gone by then.  Tom came back in and tried to ease my mind that they would not do this again.  I was pretty shook up.  Tom is my hero, though, and I know he would not let anything happen to us.  The next morning Tom reported it to the marina and the head of security came down to talk to us.  Of course, he said that nothing like this had EVER happened before.  Yeah, right.

We had called Jimmy’s son, Teal, the day before and he came to meet us Sunday morning.  He looked so handsome with his beard growing out.  He looks more like Marcia the older he gets.  He had had a bicycle wreck a few days prior and was pretty banged up.  He was riding his bike to work and a car hit him.  He broke his mandible at his chin and had to have that wired back together, he had a concussion and he had road rash all up and down his body.  He was still handsome!!  He took us to his place, which was just a block or so from the marina and then he took us on a tour of NorthwesternMedicalCenter, where he works in pediatrics.  I know he is a fine doctor, because he is a fine young man.  Jimmy and Marcia, you did good.  What a great guy.  Even with all his ailments right now, he still found time to take us around.  Thanks, Teal.  We love you.

Dad (lets just go ahead and call him Uncle Si) in his fourth month of growing a beard.

All the boats on mooring balls at the marina

We stayed in Chicago for a couple of days then started down the river system.  We left Chicago at 6:30 am and had a beautiful cruise down the Chicago Sanitary and Ship Canal.  There were plenty of sights and plenty of smells.  Some of the water is so nasty, you can’t even put your hand in it.  YUK.  Hey, maybe it cleaned the bottom of the boat!!

Sunrise, yes, Jean, I was up at sunrise, leaving Chicago.  It was so beautiful with the Chicago light house. 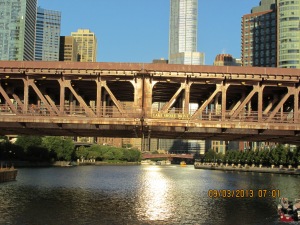 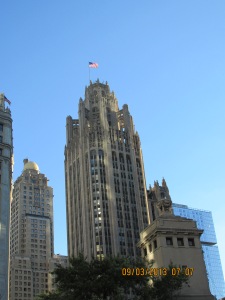 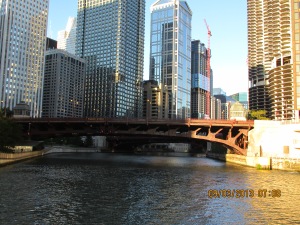 This is how low the bridges were

We even have a bridge named after us.

pagoda on the Chicago River.  There were people doing Tai Chi there. 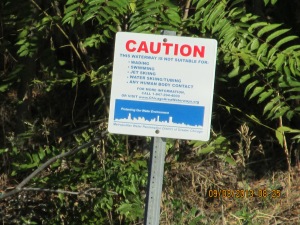 I don’t know if you can read this sign, but they were all over the place down the Chicago Sanitary and Ship Chanel.  It says not to even think about touching the water or your body part that touches will fall off.   Scary, right?

This was to keep the Asian Carp out of the Chicago River and onward to Lake Michigan. 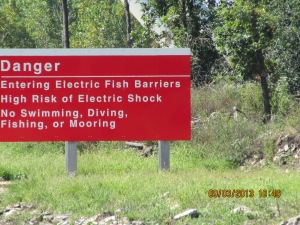 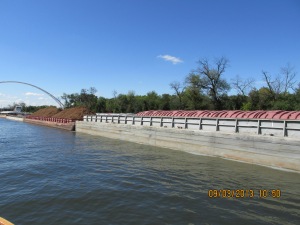 Passed a tug with eight barges.  I thought this was a big deal til we passed one with 15!!! 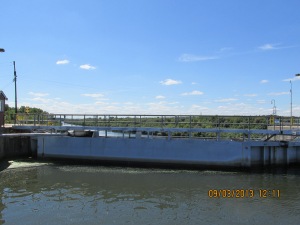 We went thru three locks. One was a 39 foot drop. 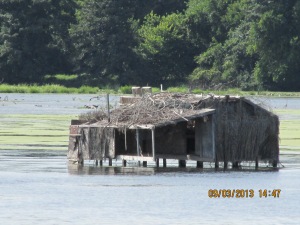 I told you Uncle Si was with us.  This is his duck blind

We saw a couple of bald eagles and a million herons.  How can they survive in this nasty water?   Our next stop was Harborside Marina.